Posted by 2geeks3knots on January 23, 2017
Posted in: Around the Sound, Kayaking, Nature. Tagged: Execution Rocks lighthouse. Leave a comment 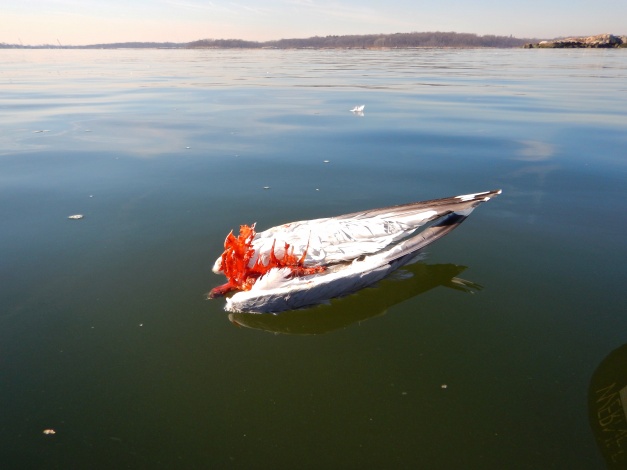 It was lovely day on the water…but not for everybody. One of the peregrines that haunts Execution Rocks lighthouse made a meal of this pigeon. And it was seriously considering Luke’s new drone for dessert!

Luke recalled the gizmo ASAP when the falcon took a second, then a third fly-by…

Haha, we might’ve been watching footage like this instead of the aerial paddling video Luke made. Click below for the ultimate “flying camera” POV! 🙂 🙂

Is Execution Rocks lighthouse haunted? Definitely. By cormorants, gulls, peregrine falcons, seals (see arrow at :52) and us paddlers. Despite the unholy stench of bird guano, it’s one of our favorite haunts. Click for video—an impromptu “family reunion” on 1/16/17—courtesy of the mega-talented Luke (aka kayakhipster) and his new drone. 🙂 🙂

Plastic cups. Beer cans. Balloons. Bilge…That’s what we usually encounter in our corner of Long Island Sound just north of New York City. But who knew “junk” fish (bunker) could be so attractive?

Dan Reiner gets the scoop: LOHUD The Journal News (July 25, 2016—all photos from that report):

Humpback Whale Seen Off New Rochelle
New Rochelle resident Dan Rogers headed out with some friends on a fishing trip Thursday morning, with hopes of catching some blue fish in the Long Island Sound. Around 1:30 p.m., he got an unexpected visitor several yards from his boat, when a humpback whale breached its head.

On a typical whale-watch tour you don’t usually see your own apartment building in the background.

“It was kind of wild,” Rogers said Friday. “There was a ton of bait fish out there yesterday. They were getting attacked by blue fish and the whale came in and started feeding on the bait fish.”

Rogers was fishing in the Sound between the New Rochelle shore and Execution Rocks Light. Some boaters followed the whale at a distance as it continued to feed and breach for air, he said.

The Coast Guard sent out a radio transmission Thursday warning boaters to stay at least 100 yards away from the whale. [Oh, ya think?] On Friday morning, the U.S. Coast Guard Sector New York said no further details were available.

“We have sightings around Long Island all the time for different species of whales,” said Valentina Sherlock, program coordinator at the Riverhead Foundation for Marine Research & Preservation. She said it’s hard to tell if whales commonly enter the waters near Westchester due to a lack of citizen reporting. 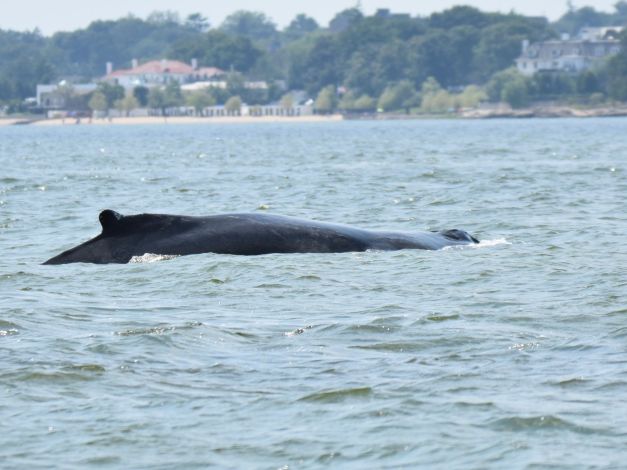 “You are going to see in the coming years — a lot more effort into whale monitoring if people continue reporting,” she said. Westchester’s most recent whale sighting had been last September, when a humpback made its way through New Rochelle and Larchmont.

Anthony Lalli, a New Rochelle resident and fisherman of 35 years, described two whale sightings in one year as “unbelievable.” Last week, he said, a large sea turtle swam up alongside his fishing boat, also near Execution Rocks Light. Lalli pointed to clean-up efforts in the Sound as a possible reason for the increase in marine activity.

On Friday, the whale was reported to be seen headed east on the Sound toward northern Westchester and Connecticut. 🙂 🙂 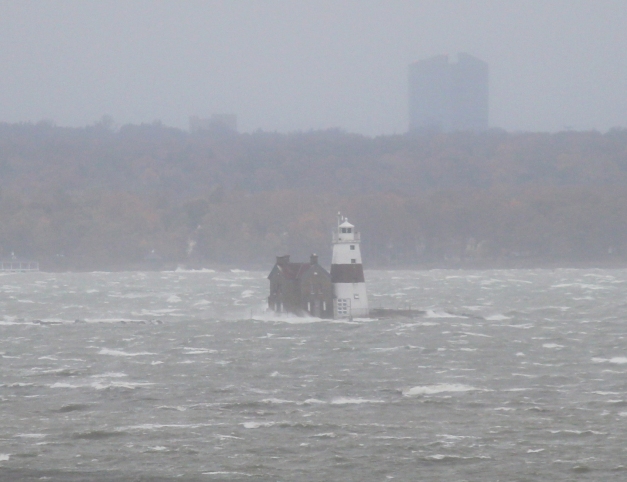 Today marks the third anniversary of “Frankenstorm,” aka “Post Tropical Cyclone Sandy,” aka, hurricane Sandy—the 10th of the 2012 Atlantic hurricane season. She made landfall here around 8 p.m. (the very moment of this posting… spooky!) on Oct. 29, with winds of 80 mph. Full moon + high tide = water 20 percent higher than normal. (Photo above: Execution Rocks lighthouse, one of our favorite “loops.” Photo below: Same. Under very different circumstances.) 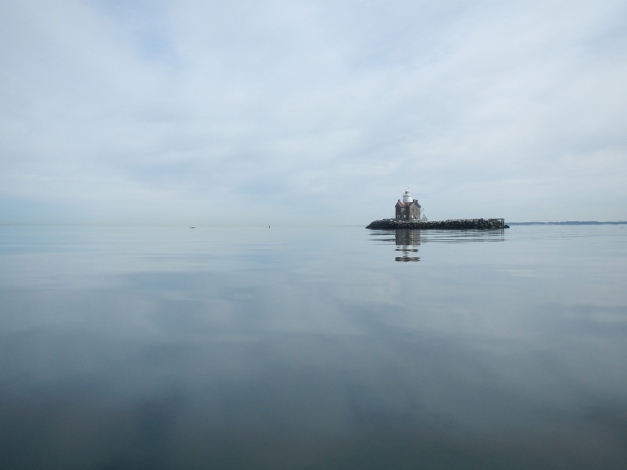 Another Peek at Purple

Ailsa’s travel theme this week is purple. And it was so much fun the first time, we just had to do it again. Did you know?…

Purple is the hardest color for the eye to discriminate. Okay, stop reading right this second and check out Hinton’s Lilac Chaser online-optical-illusion-visual-phenomenon gizmo! (Follow the instructions there and be amazed…Go ahead, do it. We’ll wait.)

Purple is also very rare, in nature. But we caught glimpses of it just yesterday morning on a pre-dawn, pre-work out ‘n back to Execution Rocks lighthouse, as the sun played peekaboo with us and the Long Island Sound. 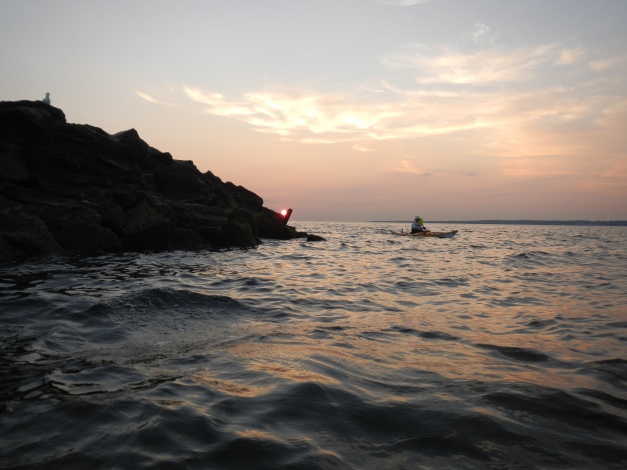 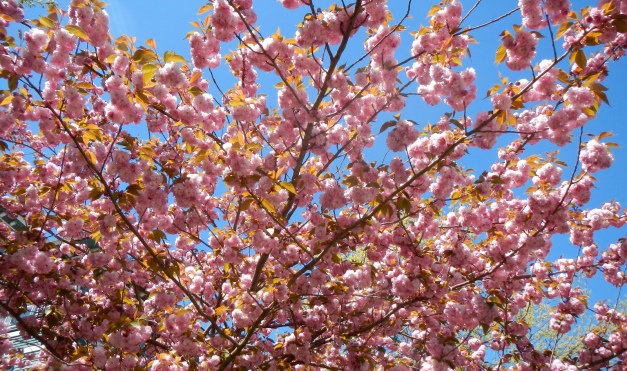 Today’s commissioning ceremony marked the start of the 125th season of Horseshoe Harbor Yacht Club (or, in our book, the shmanciest kayak storage around).

Organized in 1888, HHYC is one of the oldest (and most laid-back) yacht clubs in the U.S. You can see historical pics of the club here, courtesy of the Larchmont Historical Society​​​, and some of the very latest, below. 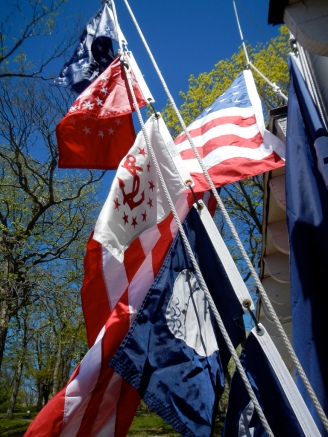 We skipped the champagne  (well, for the most part, ahem) and celebrated by jumping into our yachts and paddling across the Sound to Execution Rocks lighthouse. 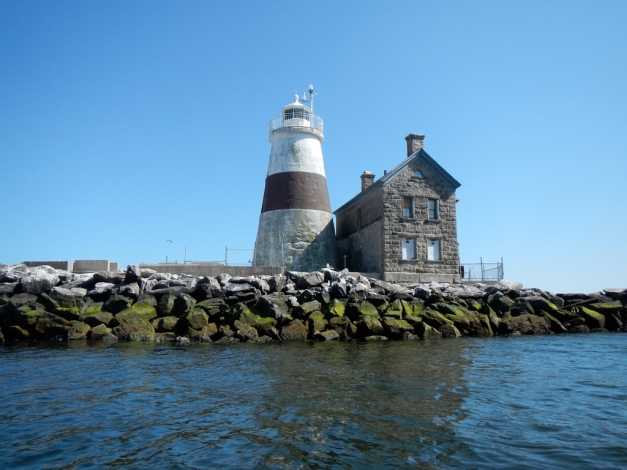 Some say it’s haunted. Ooohh! Maybe that’s why the wind swung around from the SSE and blew us back in record time… Video here is en route only—we were too busy surfing whitecaps on the return (both hands required).