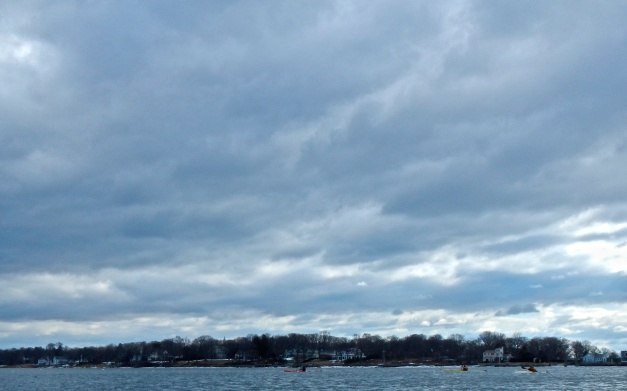 Are you smarter than a duck? We like to think so. But sometimes we have to wonder about ourselves. Take two Sundays ago, for example… “Sunday morning: West winds 10 to 15 knots gusting to 20, increasing in the afternoon with gusts to 35 knots.” So droned the local marine forecast each time we checked. (Ducks have their own mysterious methods of predicting weather.)

Thirty-five knots?! Whipping up 32-degree water? Luck—or rather, land—would be on our side, as a northwest wind is an offshore wind to us. We’d hug the shore, duck-like, enjoying its protection from the wind, all the way from Larchmont to Mamaroneck to Milton Harbor/Rye Marina and back. Plus, we’d start early and be off the water before things got too bouncy. Plan! 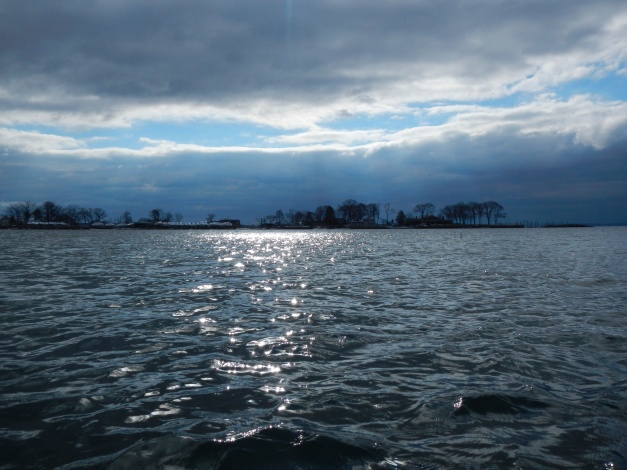 We met up with Alan, Rick and Andrew (experienced year-round paddlers) at the mouth of Mamaroneck Harbor. A mile later, we were astonished to find our usual shortcut near Hen Island was still frozen over.

Ice too thick to punch through from above…or below.

The ice was too thick to punch through. So out and around Hen Island we went, as ducks stood one-legged on the ice, eyeing us warily, conserving their energy. 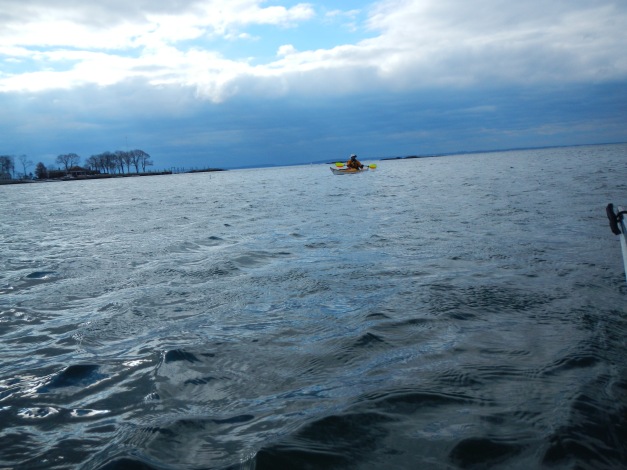 Milton Harbor was ice-free. As the wind picked up, we paddled in the lee of Hen Island and Marshlands Conservancy to Rye Marina (and deli). Five scrambled-egg breakfast sandwiches later, we got back in our yaks and headed for home.

We heard it before we saw it. At the mouth of Milton Harbor, 35-knot NW gusts howled across the open Sound, blowing anything and everything swiftly to Long Island, four miles and one shipping channel away. From the windward side of Hen Island, we remembered that our iced-in (dangerous) shortcut wasn’t an option. After some exploration, we decided to portage to the calm protected side of Hen Island, then relaunch and—maybe, maybe—round that vicious corner to slog upwind, exposed, just one nautical mile to Mamaroneck. 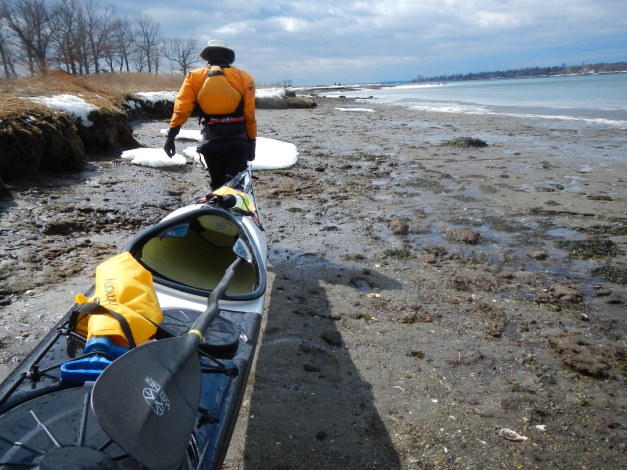 “Portage” is French for “shlep.”

Alex (and grasses and clouds) bend to the wind

Rick saying something hilarious, but inaudible, over the wind

Jean grins and ponders an easier way out…

“We won’t be able to hear each other over the wind,” Jean hollered. “We’ll need a hand signal for ‘Plan B.’”

“Plan B?” Alex shouted back.

“NOT slogging to Mamaroneck! Instead, we float downwind to American Yacht Club where they’ll be very happy to see us alive and kicking, and where there are roads (unlike Hen Island) so we can get picked up and cartop it home, yay.”

Jean yanked her thumb back over her head. Retreat!

Rick points to dock at American Yacht Club; wind-whipped waves in the background

“Hello, honey?” Perhaps THE TWO MOST IMPORTANT WORDS in kayak safety. Alan calls Deborah to come pick us up.

While these conversations were happening, Kevin—the sailing instructor at American Yacht Club who’d just cancelled the frostbiters’ class due to ridiculous weather—looked out across Milton Harbor and saw this (click for video):

And about ten seconds later, he saw this: 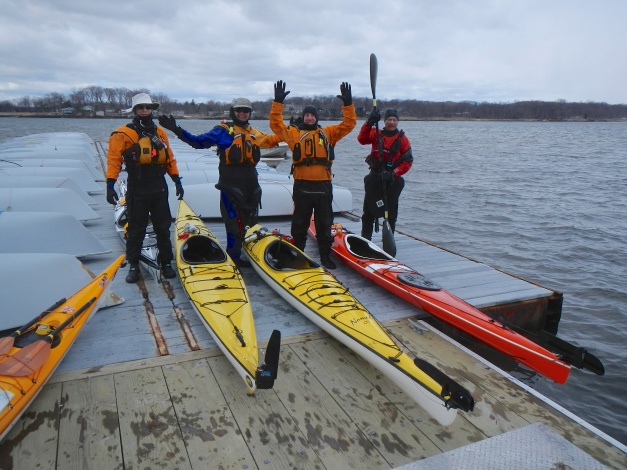 Plan B arrived in the form of Plan “D” for Deborah.

You can always tell a fellow kayaker by his/her car’s kayak racks.

In strong winds, even cartopping can be a challenge.

Icy crisis averted. Till next time!

So… in conclusion: What if we had stuck with our Plan A: Paddling to Mamaroneck in a 30+ knot headwind in choppy 32-degree water? What could possibly go wrong…? Well, we might’ve got back just fine. On the other hand, upon venturing out from the wind protection of Hen Island, one (or more) of us might have been capsized by the gale—inspiring others to attempt rescues, who’d likely capsize while trying to reach the swimmers. An icy “all-in” situation (very bad). Other risk factors we considered:

Beware the Ides of March, they say; and may we add, the temptation to see what it’s like to paddle in winds higher than we’ve ever experienced. Let’s just save all that for warmer weather and water. Plan!