We had loads of fun paddling through the slush.  Some people sled…we crrrrunch!

Birds Of A Feather 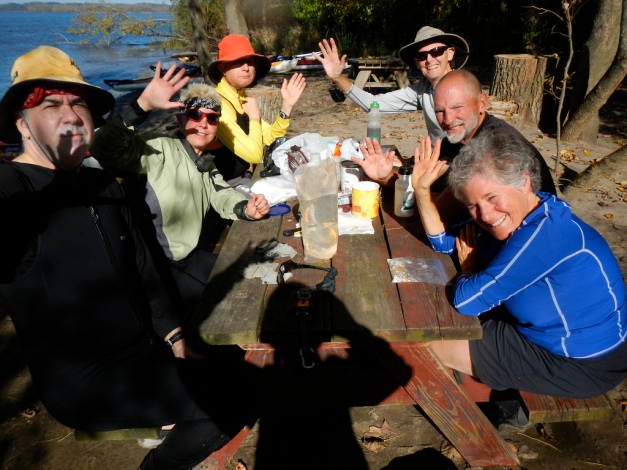 Kayaker kinship: You find it wherever there’s water.

Besides enjoying good company as you glide along on a sunny morning or slog it out in a 25-knot headwind, it’s nice to know somebody’s looking over their shoulder now and then to check that you’re still right-side up! (And if you’re not, well, you know they’ll help you get back in your boat pronto—without laughing too hard at all your sputtering.)

But the best thing about our kayak mishpocha is, it keeps growing. Everywhere we go, we meet kindred spirits: people who care about the environment, who love nature, who think there’s no better show than a good moonrise over the Hudson and are willing to risk a decent camera lens to capture it. Which brings us to today’s guest blogger and floating photographer extraordinaire, Michael Kalin.

Michael and Julie are two of the newest members of our extended kayak family. We met in October while kayak-camping with Vlad and Johna (aka, Wind Against Current) at Stockport Middle Ground, about 20 miles south of Albany and a tad north of Hudson, NY. Since April 2013, Michael had been keeping his eagle eye on another growing family there. His account follows, along with his incredible photographs. [ALL PHOTOS PROPERTY OF MICHAEL KALIN] 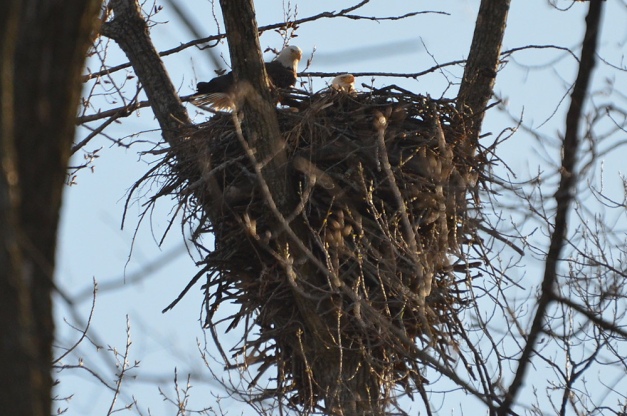 MK: 5/1 “I blew it! I’d just completed a paddle-by of the nest area, where one adult stayed aloof, and headed toward the top of Stockport Middle Ground. I spotted a juvenile high up in the cottonwoods and took another mediocre set of photos. I’d given up as it flew past me toward the nest site when I heard a tremendous rustling at my back. I turned to see the adult and juvenile swirling around each other, the adult driving the young one off! My camera wasn’t ready. By the time I got focused, it was all over. My guess: a 2012 chick had returned to the roost of fond memories, but the parent would have none of it!”

5/1: Of all my missed photo-ops, this gives by far the most pain. This Spring, I’ll be ready!

MK: May-June “These photos show parental activity, including a moment together a few feet from the nest. We never saw the chicks in the nest; it was too deep and too far back.” 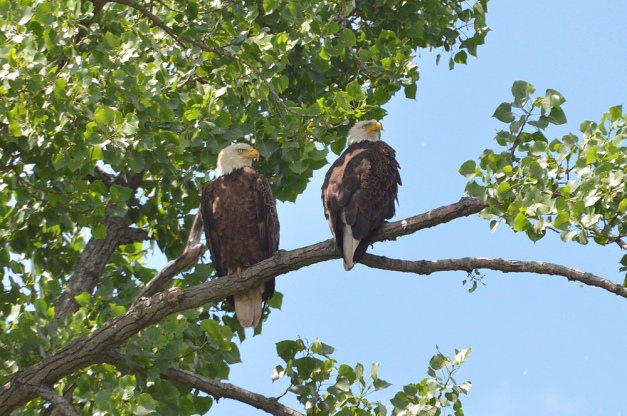 MK: 7/12 “What a shock! Babies three to four months old, fully grown and out on limbs. I don’t know when full size was reached (a rare three-week absence from Stockport Flats on our part).” 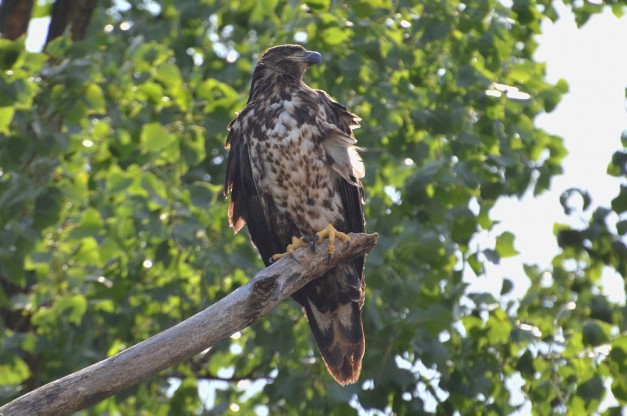 MK: “While we watched, the other parent put on a fishing demo for her youngsters. She flew across the treetops, turned toward us, then carried out a slow swoop without getting wet and turned back across our bows. Didn’t work, though. The hungry baby retreated to the nest and kept sobbing.” 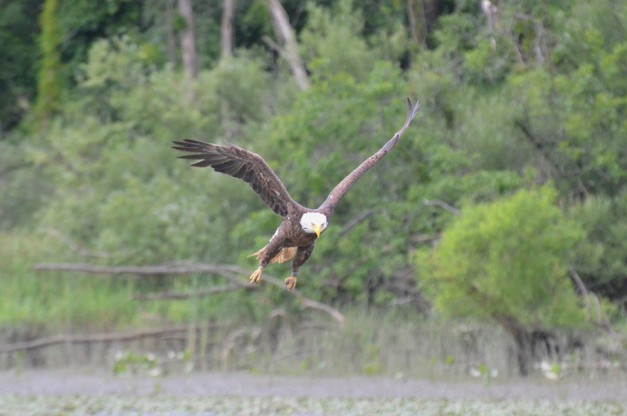 7/12 Fishing demo for the kids

MK: 7/27 “My ability to sex eagles is questionable. I’m right about half the time (?). Also, I’m no eagle expert; much of the behavioral interpretation is sheer conjecture! But no question about it, they do grow very fast.”

MK 8/2: “Parents got serious about raising eagles! Mom flew in with a big fish, then ate it in front of the kids, no sharing! One baby screamed in agony, Dad recoiled in horror from all the racket.” 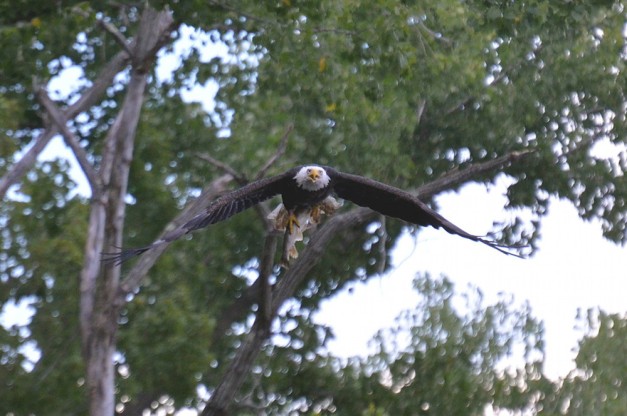 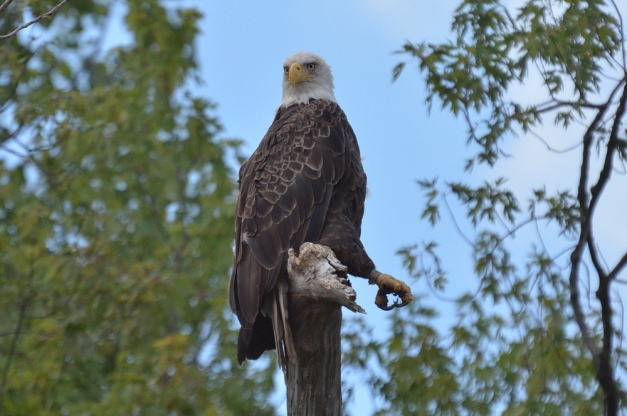 MK: 8/6 “An astonishing discovery—a third chick! Where had it been hiding?”

MK: 8/10-8/12 “Soon, the babies were becoming eagles. We enjoyed watching them grow up, as did their parents.” 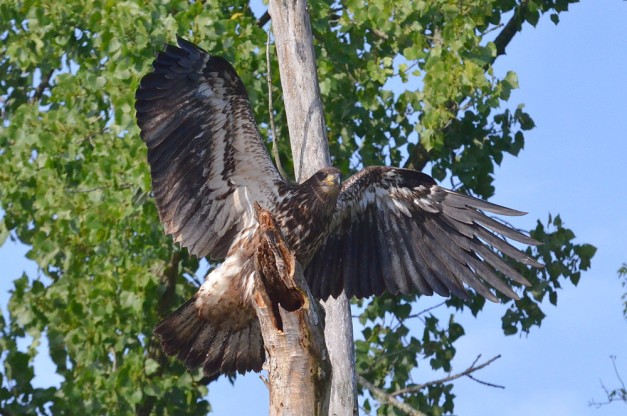 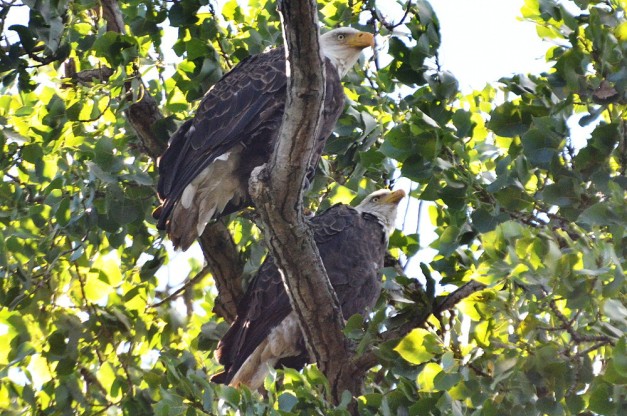 MK: 9/25 “By the end of September, all three looked like they were ready to take on the world. The first photo below is the most impressive, a very strong looking bird, almost certainly a female (she’s in flight in the next two photos). This was the last I saw of any of them! Not sure exactly when the kids got the boot.”

MK: “Well, it wasn’t exactly the last encounter. We saw one of the parents on 10/13, and later, we saw both adults in Brickyard Bay. But for me, the gallery was complete 9/30. Only three months from now, we get to do it all again (I hope!).” 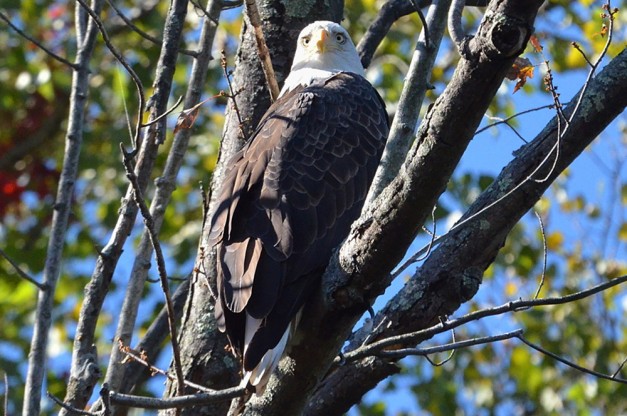 9/30 Dad takes one last look around

Thanks to Josh R and WordPress for the Weekly Photo Challenge: Family. And eternal gratitude to Michael Kalin for sharing his eagle love! Check out his online gallery, The Eagle Family of Stockport Middle Ground and other photos of his and Julie’s regular paddles in this area near the Hudson River Islands State Park.

Posted by 2geeks3knots on January 19, 2014
Posted in: Around the Sound, Kayaking, Nature. 2 Comments

We are going to stick to the couch

Posted by 2geeks3knots on January 5, 2014
Posted in: Kayaking. Leave a comment

Reblogging from one of our favorite sites. Suddenly we don’t feel quite so bad about our weather in New York…

Wishing you all a cozy Sunday evening. H